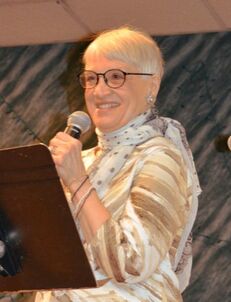 Marilyn Lester has worn a lot of hats in her career, most of which involve words. Her core training came from alma mater,     New York University, where she studied journalism. After a stint working as an associate editor in McGraw-Hill's now defunct magazine division, she became a freelancer––a path that took her into feature writing, magazine editing, marketing, advertising, promotion and publicity and a few more odds and ends of wordsmithing,  including co-authoring a few books.

Through friends, and a former spouse, Marilyn also skirted the edges of theater, so another track early on took her into playwriting, dramaturgy, scriptwriting and creative consultancy. She worked with the late television pioneer Alvin Cooperman developing
potential TV shows and also found her way to producing musical programs and theater.

Currently, Marilyn is a critic/reviewer and writer on jazz, cabaret, popular music and theater. She's working on several theater projects and two films in development. She's also the associate editor of the newsletter of the American Popular Song Society and the editor of the Duke Ellington Society of New York newsletter. In that regard, she's an Ellington "expert," active in the international Duke Ellington Study Group.